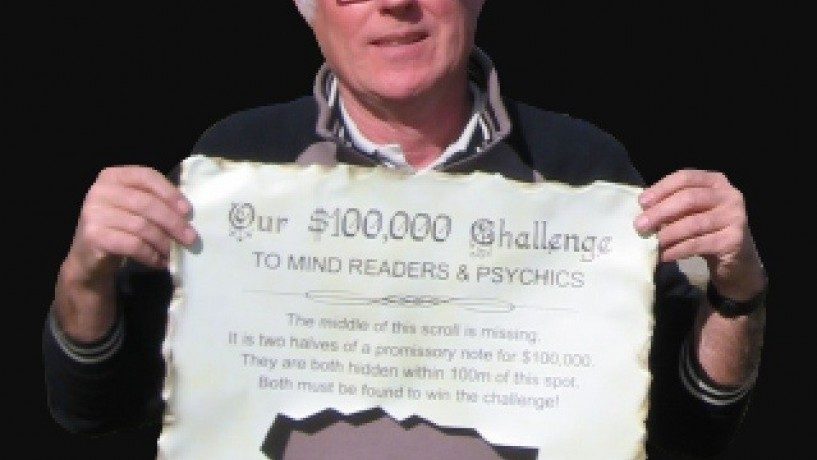 The Psychic Challenge is over

For nearly 30 years Puzzling World has been home to one of the more bizarre offers for those who claim supernatural power. Today however it has been decided that the $100,000 Psychic Challenge is officially over.

In 1994, Stuart Landsborough, creator of Puzzling World and longtime member of the NZ Skeptics Society offered a reward for any psychics or mind readers to sit with him, read his thoughts and find a promissory note for $50,000 hidden on the property.

Over the next decade six attempts by mediums of every ilk, including psychics, diviners, spiritualists and the devoutly religious tried and failed to scoop the prize money offered.

In 2006 in the face of growing media interest in this field, Stuart decided to increase the reward to $100,000, split the notes into two and decrease the search site from 200 to just 100 metres.

In March 2009, an Israeli Psychic became the first to try for the inflated prize total and declared he wouldn't need to "search" for the hidden notes because he "knew" their location. With a book full of his written "thoughts from a higher spirit" he rifled through office shelves and under sofas before admitting defeat, thus becoming the challenge’s seventh failed attempt.

The website, psychicchallengenz.com was also launched that aims to question psychic ability, offers reviews of live psychic performances (including local shows from Sensing Murder’s psychics) and a full run down of the rules, past challengers, links and commentary on the dangers of this particular form of “exploitainment”.

While many fun, free guesses have been offered, no serious challenger has come forward since, and with Stuart now fully retired and no longer willing to continue the challenge believing, “after all the years, I think I have proven my point!” the Psychic Challenge has ended, unclaimed.

Your family and friends aren't going to believe your tales of holding up a Leaning Tower, toileting with Romans, making balls roll uphill and shrinking to be 4 feet high without proof. Share your images (and tales) and blow their minds!

I like this - a selfie in front of the Dazzle Wall in the Tilted House, using the mirror reflection from the top of the slo...

Love this shot, and the handle of the customer who took it :) Credit: keepingupwithmarkdashian

It was hoped it wouldn't happen but unfortunately with 80% of our staff now in home isolation we're going to be closed tomo...

How many people (real or otherwise) can you see in this image? #ColumnsOrColins

So...it's sounding a bit 'Biblical' now - we've been disrupted by sickness, power outages, it feels like a drought and now....

Happy birthday to the boss, Heidi - seen here with big sis Kim on a tour of their business over 40 years ago!

Yes, it's very sad that our favourite sponsored events - the Junior, Intermediate, and new Mini Challenge race events are u...

Not sure if Puzzling World is in your plans this summer? Why not 'try before you buy' and take a Virtual Tour' here; https:...

Here's a great stocking filler for that person in your life who loves a good 'Escape Room' - Will you be able to solve the ...

If you've been handed the job of organising the Xmas outing...and you've left it until now, don't stress, we can help!