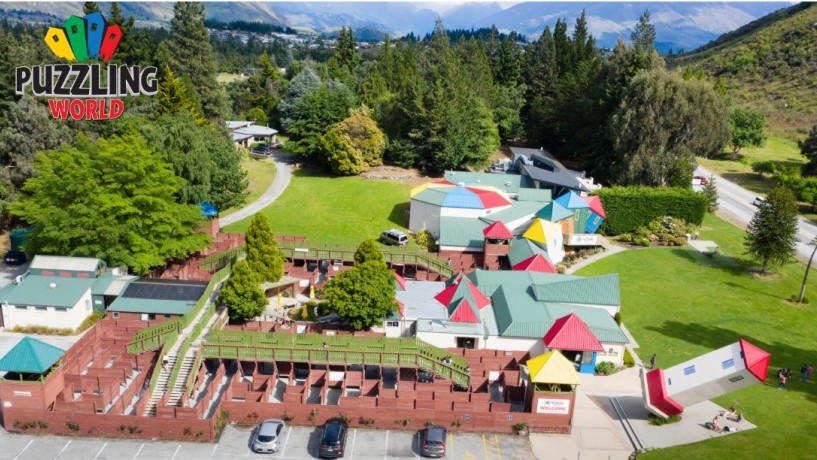 This week, Wanaka’s iconic tourist attraction, Puzzling World officially released their virtual tour to offer those unlucky punters trapped during Covid-19 at least a glimpse of what they missed, or hopefully, can look forward to in the future.

In fact, with eleven key areas featured, 360° clips, drone footage and a sped-up ‘Time Warp’ tour of the entire business, perhaps more than a ‘glimpse’ is available!

“We had this tour created last year with its usage as a unique training tool at tourism trade shows its main purpose”, remarks Duncan Spear, Puzzling World’s marketing manager. “With such shows now cancelled for the foreseeable future, and many disappointed tourists who’ve had to cancel dream holidays down our way, we thought we’d offer this free tour as a way to help soften the blow and perhaps generate excitement for a return to open borders”.

Storyline Pictures, a Nelson-based consultancy were brought in to film segments over the course of a week to create an immersive tour of all areas of Puzzling World and includes fun, inbuilt video sequences that allows the user to genuinely feel they’re ‘in the scene’. Daron Graham, the firm’s director states, “Google are saying that people researching online for the future (including travel) has almost doubled. People at home have a lot of spare time and internet usage is up, with virtual tours being very popular. Puzzling World’s is a cool presentation and every bit of marketing will help during these times”.

Visitors to Puzzling World’s website can find the link from the ‘Attractions’ page, otherwise they can visit via https://cdn.storylinepictures.nz/puzzlingworldand enter a world like no other, Puzzling World.

Your family and friends aren't going to believe your tales of holding up a Leaning Tower, toileting with Romans, making balls roll uphill and shrinking to be 4 feet high without proof. Share your images (and tales) and blow their minds!

Not sure if Puzzling World is in your plans this summer? Why not 'try before you buy' and take a Virtual Tour' here; https:...
Here's a great stocking filler for that person in your life who loves a good 'Escape Room' - Will you be able to solve the ...
If you've been handed the job of organising the Xmas outing...and you've left it until now, don't stress, we can help!
To meet our obligations under the Health and Safety at Work Act 2015 and to protect our team members, customers, and the on...
Happy 10th work anniversary to one our superstars, YURIKO!! The last few lines of the long poem i gave says it all :) With ...
Who loves a good combo deal? @lakewanakaisite is the place to pick up this cracker! #wanakasbest #springdeals #allthesenses...
This is a must for the bach/crib or whatever you call your holiday home. It's a pocket-size brain gym with over 500 full-co...
Another year, another great planting up at Diamond Lake for the crew at Te Kakano Aotearoa Trust . Well done everybody, 200...
We're confident that the team of 1.4M in Auckland will soon be out of lockdown and will (ahem) legally be heading to Wanaka...
There's nothing more relaxing than staring into a Rob Gonsalves painting like this classic, 'The Sun Sets Sail'. If you can...